A few months ago we were working with a missionary that left the MTC here for some previous financial mis-use.  We had to travel to Azua an hour and a half away a  couple of different times.  Then he dropped someone's camera and had to repay that.  It seems to be extremely difficult for them to find any kind of work to get money.  Chuck decided to give the Branch President some money and have him find some work for the elder to do so he could earn it.  Things seemed to drag on and we weren't sure he would ever get back in the mission field.  Well - last Monday we were going down the hall to have the class where they teach us.  Chuck gets a tap on his shoulder and it was him!  It was so fun - like a long lost kid - found!

There isn't much to update about our work - it just seems to go on and on with finding problems that need to be resolved.  The good part is at least that is a starting point for them to hopefully repent and return to good standing in the church.  We know that the better auditing procedures and training put in place by the Snows that preceded us are allowing for better reports that show trends and red flags.   We often feel like the "bad guys" but someone has to do this right?

The DR seems to have many holidays - last Monday was another one and the office was closed.  We checked out a van and 5 couples headed to the north shore 3 plus hours to visit La Isabela - a settlement established by Columbus.  It is right on the ocean and the water was so many different shades of blue - absolutely gorgeous.  There are only "footprints" of ruins left.  It was destroyed in the 70's either on purpose by Dictator Trujillo or his instructions to "clean up the site" were mis-interpreted and things were bulldozed!  We can't seem to get a real story.  It was interesting to be on such a historical site and stand on the cornerstones of what may of been Columbus' small home . . . we do know he had a great view of the ocean!   We had all taken a lunch and found a beach to sit on for some addictive ocean watching! 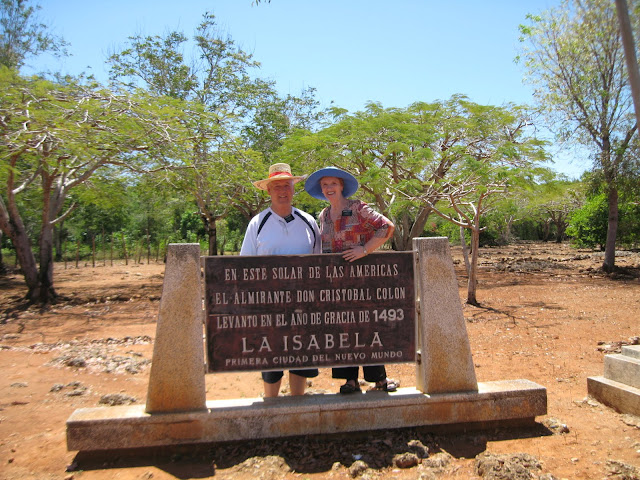 Chuck and Vickie at Isabela - we are looking out at the gorgeous ocean!

The latest project of the neighbors was last Saturday - I was up early and watched him strip a dry palm frawn down to the stem.  Later I see him sitting in front of his door with the dry leaves in a pile and he has a chair that I instantly realized he was going to weave a cane bottom for that chair.  It was fascinating to watch him from the distance of our window.  It looked like he was doing a beautiful job - definitely had done that before.  They live on the other side of the cement wall of our parking lot.  I think they may be Haitian.  The next time they are doing something I think I will go over and check it out . . . or send Chuck!   These are the men that washed their dishes with dirt and a little splashed water.

My brother Dick called last night and his grandson Jed Buehner had just opened his mission call - Santo Domingo East Mission - he will arrive here in September at the Missionary Training Center two blocks from us!  Bienvenido Elder Buehner . . .

HAPPY MOTHER'S DAY TO ALL OF YOU GIRLS - have a wonderful day and we will hope those around you remember how much pampering you deserve!

Love to all and remember how much we miss you xoxoxoxooxxo  Mom and Dad, Chuck and Vickie, Grandma and Grandpa

Posted by Vickie Rucker at 2:37 PM