We had three new couples arrive this week - Walkers as Area Doctor, Wegners as PEF and Crismons as Welfare - they are our "wall partition neighbors" at the office.  It is always fun to welcome and hard to tell the others goodbye!

We are thrilled with the announcement that Mauricio Munive assigned here in the office from Mexico has been called as one of the new mission presidents to begin service in July.  He works with us here in the Finance Department and is a wonderful man.  He has a daughter going to school at BYU Idaho - Emily was a temp here for a while and is a doll.

Last Sunday we had two disciplinary counsels to attend in case Chuck needed to verify some information that might be needed.  We realize it is a minuscule percentage where this is necessary and much less that most organizations but it is still heartbreaking.  Both men were excommunicated for their abuse of the financial responsibility they were entrusted with.

We were at a beautiful new chapel that was just dedicated in November.  It was interesting that the building didn't have electrical hookup to the city.  It is run totally off it's own generator.  The electricity is so sporadicthat it was decided to just see how the self generator would work.  The electricity goes off in our apartment at least twice a day - gratefully it usually comes right back on.  It goes off often at the office also.
It was pointed out to me the other day that out of all of the Caribbean Islands only three speak Spanish - ok, so it is the largest ones but still only three - DR, Puerto Rico and Cuba.  The others are English, Dutch, French and some other dialects.  Nice there are many people that are good at languages!

Chuck gets called occasionally to go to the foyer and help Alicia, a receptionist that is rather short, change the music CD's for the office.  It is a pain for her to drag something to stand on and she thinks it is wonderful that he can do it so easily! 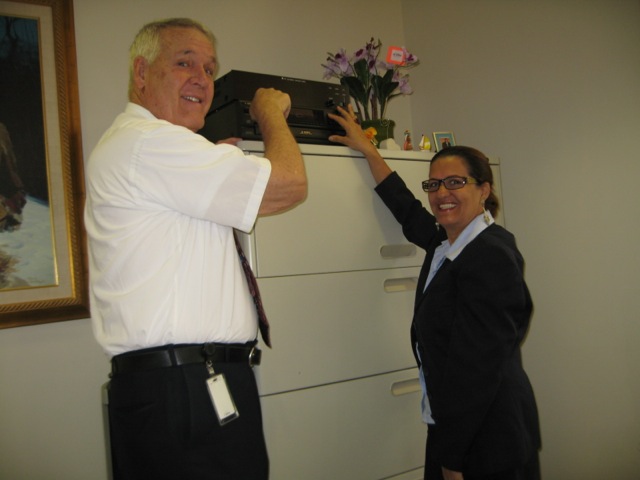 Chuck's favorite thing to see this week were two motorcycles pushing a truck - sorry no pic.

Elder Cornish of the Area Presidency spoke at our Devotional (held every Tuesday) this week.  It is broadcast from this office all over the Caribbean to different sites.  He was talking about faith and telling the story of Peter when he went to meet the Savior walking on water . . . and Peter started to doubt himself . . . and Jesus said to him "Oh ye of little faith."  He asked us how many would of even got out of the boat?  He gave us many things to think about concerning our faith.
Our weather is gorgeous for now but we hear the heat is coming again! LOVE TO ALL you good people - Mom - Dad, Chuck - Vickie, Grandma and Grandpa  XOXOXOOXOXXO 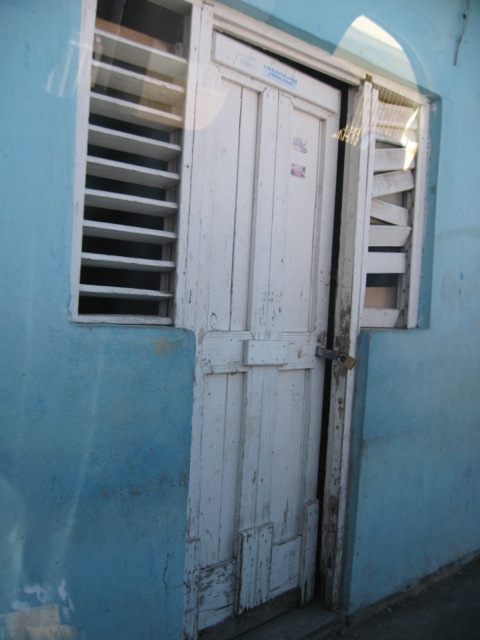 We were parked by this door and it facinated me so I took a picture . . . such security! 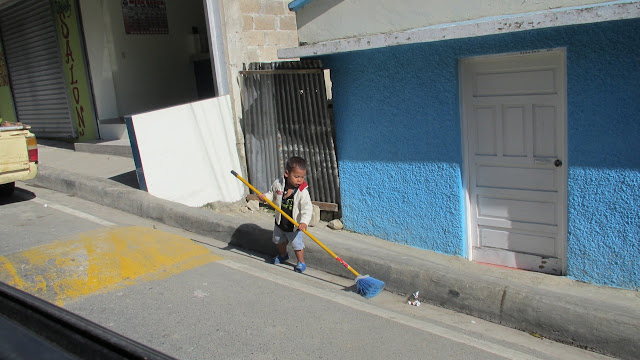 This little boy was just a few feet from a busy street - working hard. 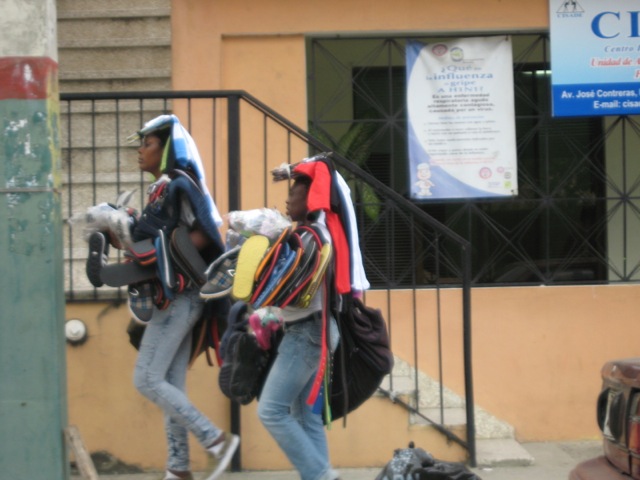 These ladies are carrying their store with them.